In spite of heavy volumes of construction, rents in the city continue to rise and investors are still eager to buy apartment properties here. 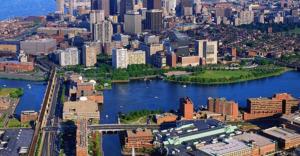 “There are only a handful of markets across the country that have this much construction underway,” says Peter Conway, market analyst for New England with research firm the CoStar Group. “With this huge wave of supply, there are a questions about how the market will absorb it.”

In recent years, Boston’s market has already successfully soaked up several waves of new apartment construction. The number of vacant apartments has crept higher, especially for luxury units, but rents continue to grow and are expected to move higher still.

“We have outperformed [on] rent growth and vacancy,” says Simon Butler, vice chairman and partner in the Boston office of CBRE/New England. Boston’s strong, diverse economy keeps drawing new people to the city, filling up buildings in growing neighborhoods from Alewife in Cambridge to the new Seaport District.

Developers now have roughly 20,000 apartment units underway in the Boston metro area, according to CoStar. A significant number of those new units will open in 2019. CBRE puts the number at 11,859 new apartments opening this year.

Even if the delivery of many of those units ends up getting delayed, 2019 is still likely to be a very big year for new apartment openings in the city, following several other years of big deliveries. From 2015 to 2018, developers opened an average of 8,700 new apartments a year. That’s twice as many new apartments per year as Boston developers opened from 2002 to 2007, during the last housing boom.

Most multifamily landlords are still able to raise their rents. Boston apartment rents grew by an average of 2.8 percent in 2018, and rents are expected to rise 1.4 percent in 2019, CoStar estimates. Older apartments have the lowest vacant rates. Just 2.8 percent of class-C and class-D apartment units were vacant at the end of 2018, according to CoStar.

Luxury apartments are suffering more competition from new construction—7.0 percent of Boston’s class-A apartments were vacant at the end of 2018, according to CoStar, which anticipates that number to rise towards 10.0 percent over the next two years as developers open new high-rise buildings. Property managers are increasingly likely to offer rent breaks or other deals to lure tenants. In Boston’s Seaport neighborhood, a new district of luxury towers just outside of downtown, they offered concessions at nearly half (43 percent) of the available apartments over the last 12 months.

Overall, however, Boston’s strong and diverse economy keeps demand for new rental units high. Companies continue to hire new people faster than developers can create new places for those people to live. The number of jobs in the Boston metro area increased by 248,000 over the five years that ended in 2018. Over the same period, developers added just 25,000 units of housing to the area’s total inventory, according to analysis of Census data and housing completions by Marcus & Millichap. That’s a huge mismatch that should keep driving housing prices higher.

All this new construction is a big change for Boston, where apartment developers once had to fight for years to find a site and get the zoning approvals to begin new construction. “Boston has historically been an under-builder,” says Conway.

Times have changed—Boston and the surrounding towns have set a goal to encourage the construction of 185,000 new housing units by 2030. That includes 69,000 units in the city proper. At the same time, it’s getting harder to start construction on new apartment projects for reasons outside city zoning laws. The costs of materials, labor and land continue to rise, especially in the downtown area. “It’s very hard to make high-rise projects work economically,” says Butler.

Suburban projects are also becoming more difficult. Developers can no longer use the state’s inclusive zoning law, Chapter 42B, to force new projects into many towns that have satisfied their requirements under the law.

Investors eager to buy in Boston

Strong demand for apartment keeps investors eager to buy multifamily properties in Boston. Cap rates on multifamily deals in the city are in the 3.0 to 4.0 percent range for downtown class-A properties, climbing higher for older properties further from the urban core.

“Our class-A, urban cap rates are among the lowest in the nation,” says CBRE’s Butler. “We have not seen any material change in cap rates.”

The challenge for investors is finding properties available to buy. Many current owners are holding onto their assets, though more smaller properties may come to the market in 2019. “We expect the number of transactions to increase a little,” says Sebree.