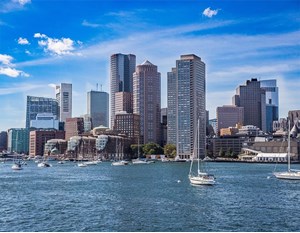 “Housing, specifically rental housing, is defensive in a potential downswing,” Colleen Pentland Lally, senior director of capital markets at CBRE, told Multi-Housing News. “In a down economy, everyone saw that the multifamily rental sector recovered more quickly than all the other asset classes and had consistent liquidity.”

Cross-border investment in the sector totaled $12.1 billion during 2019, according to the latest data from Real Capital Analytics (RCA), accounting for 6.6 percent of the total U.S. apartment market. Investment volume declined more than 26 percent year-on-year but was still significantly higher than the average for the past decade.

“We’ve returned to normal, in the sense that the cross-border buyers that are coming in are motivated more by long-term stability and safe and steady yield, which even the apartment market still provides,” noted Jim Costello, senior vice president at RCA.

Last year saw a decline in M&A-style multifamily deals, while Chinese investors, who had sought out apartment redevelopment opportunities during their U.S. deal-making spree of 2014-2017, have since gone quiet. Investors from Canada, Israel, Bahrain and Qatar dominate the ranking of the most active buyers, with Asian and European players slipping into the background.

“For a long time now, the European investors have been struggling with hedging costs, with our interest rates so much higher than those in Europe,” said Costello. “There’s a lot of investment by Korean investors, but they’ve been much more focused on the debt portion of the capital stack than on equity. It’s just a risk profile that works better for their regulators.”

Japanese capital is coming to the U.S. through funds such as the Government Pension Investment Fund (GPIF) rather than direct purchases at the moment, he added.

That leaves an outsize role for America’s neighbor to the north, which piled $25.7 billion into U.S. commercial properties during the 12 months through the third quarter of 2019, much of it channeled into multifamily.

Toronto-based Brookfield Asset Management has become one of the largest apartment owners and managers in the U.S., snapping up billions of dollars in assets since 2018, when the company closed on a $1 billion multifamily value-add fund with San Diego-based subsidiary Fairfield Residential. The company now has ownership stakes in 58,000 apartments across 40 U.S. markets.

Other Canadian players include Toronto-headquartered Tricon Capital Group, which boosted its profile in the multifamily market when it bought a listed Starlight Group fund for $1.4 billion in April 2019. Joining these listed heavyweights is the Public Sector Pension Investment Board (PSP Investments), a Canadian pension fund manager that inked a $239.6 million deal for U.S. multifamily portfolio held by a Starlight fund last November.

The U.S. offers both familiarity and proximity to Canadian investors. “Canada has enormous capital they’re looking to place,” Pentland Lally commented. “They understand the sector and they have insatiable demand because of the pension fund money that they have to invest.” Canada’s highly regulated housing market also creates a shortage of available opportunities in the country, she added.

The Middle East has also developed an appetite for U.S. multifamily, with companies like Israel’s Delek Group, Bahrain-based Investcorp and the Qatar Investment Authority among the top buyers in the space. Delek bought an apartment portfolio from Lone Star in May of last year, while QIA partnered with real estate investment trust Douglas Emmett Inc. to buy The Glendon, a 350-unit community in Westwood, Calif., for $365 million in mid-2019.

In a report published last October, CBRE found that the traditional gateway cities on the east and west coasts dominated foreign investment in multifamily—along with Atlanta, Phoenix, Denver, Dallas and Austin, Texas. Investment in Boston, Las Vegas, and Orlando, Fla., shot up year-on-year in the first half of 2019, by a remarkable 938 percent, 796 percent, and 632 percent, respectively.

“The fundamentals are spectacular” in Boston, said Pentland Lally. “There’s job growth, population growth (…) and the rents are astronomical and growing. We’ve got consistent, call it $4 to $6 a foot rents, which rivals New York pricing, without the regulatory risk that New York has, at least for now.”

“That’s why they’ve really seen Boston as a safe haven for the core investments. You’re certainly not going to be chasing yield here,” she added.