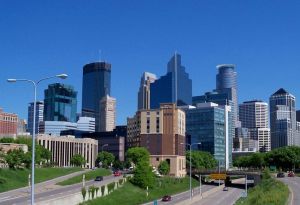 By Cameron Sperance (Bisnow.com Article)  —  The term “Manhattanization” is often wielded in city planning meetings around the U.S. to stoke fear of high prices and displacement that could come from density luxury developments. But Minnesota’s largest city now has urban planners desperately seeking “Minneapolisization.”

In December, the city passed Minneapolis 2040, a comprehensive development plan that promotes density around transit hubs and eliminates single-family-only zoning, enabling triplex developments on lots once reserved for single-family homes.

The move has garnered envious headlines from newspapers in the country’s largest cities, questioning why their region can’t do something similar.

“[Minneapolis] is trying to get in front of the housing affordability issue before it’s too late, as opposed to getting into a situation where only a select few can afford to live in the city and you wish you had done something 20 years ago,” Minneapolis-based JLL Managing Director Steven Buss said.

In a 12-to-1 vote the Minneapolis City Council approved the master plan, which aims to “eliminate racial disparities, fight climate change, increase transportation options and improve access to jobs.” The city’s old single-family zoning was created in the 1960s, when many other U.S. cities were adopting similar measures. Urban planners have since criticized single-family zoning for fostering segregation and enabling urban sprawl.

City officials noted something had to give, as nearly 60% of Minneapolis land fell under single-family zoning, and the city’s population has grown 10% since 2010, its fastest growth rate since 1950.

“We knew that many people who might want to stay in Minneapolis as they age, and leave a single-family home, had very few options,” city of Minneapolis Director of Long Range Planning Heather Worthington wrote in an email. “We also knew that those missing middle properties would be good options for people who were just starting out, or living here early in their housing tenure.”

While the median home price in Minneapolis ($300K) pales in comparison to San Francisco’s ($1.3M), first-time home buyers are struggling to find available housing stock in the Twin Cities and often compete on offers with downsizing baby boomers.

The master plan’s supporters originally pushed for fourplexes to be allowed on single-family lots, but they compromised with a triplex maximum. City planners and the region’s real estate community view the measure as a necessary way to tackle affordability with density and grow the city’s housing stock.

“They want to accommodate growth, and they don’t have their head in the sand about the urban population that is growing,” Buss said. “It wasn’t a ban on single-family homes so much as a recognition to have these big swaths of areas zoned for single-family opened up to triplexes. It gives more people access to good, quality neighborhoods.”

The sweeping change in Minneapolis is attributed to the progressive makeup of the City Council, which is composed of 12 Democrats and a member of the Green Party. Similarly progressive parts of the country are hoping to pass their own zoning reform to catalyze more housing development and promote affordability.

In San Francisco, the most expensive housing market in the country where new, dense development is scarce, California state Sen. Scott Wiener is working a bill through his state’s legislature that would eliminate all density restrictions near train stations or high-frequency bus stops.

Wiener’s first attempt, S.B. 827, called for allowing eight-story buildings near major transit stops “even if local communities object” and ultimately failed over opposition from numerous community groups and fears it would lead to resident displacement and gentrification. The senator from San Francisco revived the bill, now named S.B. 50, in December.

The new version includes tenant protections, allows communities to defer implementation to give time to plan for low-income resident protection and has the support of environmental and labor groups who opposed Wiener’s initial bill. While he aims to have a broader coalition the second time around, Wiener recognizes it will take more than his bill to fix California’s urban sprawl.

“There’s no silver bullet,” he said. “This is such a complicated program that has grown for 30 to 40 years because of California’s systematic clamping down on new housing. We’re trying to reverse that, but it can’t happen with one bill overnight.”

The sentiment is echoed in Boston, where Boston Mayor Martin Walsh is targeting 69,000 units of new housing to be created by 2030. Developers struggle to make affordable or middle-market housing pencil out at a time when it can cost as much as $450K to develop a one-bedroom residential unit, so density is the most-utilized housing tool.

Developers have begun to offer micro-units, which are roughly 450 SF for a studio apartment, within greater market-rate projects that also include full-sized units. They still aren’t exactly cheap.

A new micro-unit condo development in the city’s South End neighborhood has an asking price of $489K and up. It is still an affordable alternative compared to the neighborhood median condo price of $975K, according to Zillow. Micro-apartments in Boston’s Seaport District can fetch $2,400/month.

“If you look on a price-per-square-foot basis, it’s often more expensive than a two-bedroom or one-bedroom unit, but, because it’s a smaller unit, it ends up being more affordable,” Colliers International Director of Research Aaron Jodka said. “That appeals to a renter.”

Boston is weighing a variety of other measures to tackle affordability, including removing a minimum square footage restriction on multifamily developments to allow even more micro-unit developments. The city is also pushing for more transit-oriented development and density, but the city’s developers and urban planners have made the same argument as their counterparts in other cities: The housing crisis can’t be solved by the central city alone. The question remains if neighboring communities are listening.

“In some of these towns and communities, you would have to change the way they operate,” Jodka said. “That may not be the identity they want to have for their community.”